There are currently no events scheduled at this time. Please check back often!

On Friday, August 10th the Hershey/Hummelstown & Rossmoyne Business Center Isaac’s (in Pennsylvania, USA) held an “Eat Up” fundraiser benefitting the World Forgotten Children Foundation (WFCF). Diners were able to enjoy great food and great company while supporting WFCF’s cause. Twenty-five percent (25%) of food and beverage purchases and fifteen percent (15%) of gift card purchases (which must be used during a future visit) were donated to help WFCF support children with disabilities in developing countries worldwide. Also, at the Hershey/Hummelstown location, visitors had the opportunity to meet some of WFCF's volunteers and learn more about the foundation. 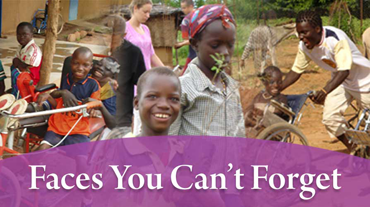 During the month of June, the World Forgotten Children Foundation (WFCF) hosted its first-ever "Faces You Can't Forget – Month of Giving."

To kick off this event, Dr. Mehdi Khosrow-Pour, Executive Director of WFCF was interviewed on the television program Good Day PA! at ABC Channel 27, a local news station in Central Pennsylvania, USA. During the live broadcast, he had the opportunity to talk about the foundation, its mission and vision, and ultimately the purpose of the inaugural event. View the recorded interview.

Throughout the Month of Giving, stories of the children and young adults who have been impacted positively by WFCF were featured on WFCF’s social media channels (Facebook, Twitter, and LinkedIn pages), and individuals visiting the pages were encouraged to share their own personal stories that align with the mission of WFCF with the hashtag #facesyoucantforget.

WFCF also welcomed guest blog authors who shared stories about their own personal triumphs and/or stories that are near and dear to their hearts.

All of the tax-deductible donations made during the Month of Giving were matched dollar-for-dollar by an anonymous donor and will go toward supporting the health and welfare needs of orphaned children with disabilities all over the world.