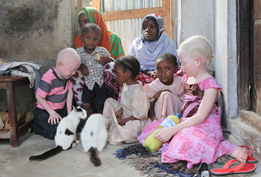 Did you know that humans, animals and even plants can have albinism?

According to Medical News Today, an estimated 1 in 70 people carry the genes that are associated with albinism (Newman, 2018). In honor of International Albinism Awareness Day, it is very important for all races with different backgrounds to gain a new and clear perspective on what albinism actually entails.

According to Medical News Today, an estimated 1 in 70 people carry the genes that are associated with albinism.

On December 18th, 2014, the General Assembly adopted a resolution (https://undocs.org/A/RES/69/170) and proclaimed June 13th to be an International Albinism Awareness Day (UNITED NATIONS). Prior to this proclamation, The United Nations Rights Council adopted a resolution that called for the prevention of attacks and the discrimination of people with albinism.

The United Nations states that the overall theme for this year’s International Albinism Awareness Day is “Still Standing Strong” (UNITED NATIONS). The purpose for this year’s theme is to recognize, celebrate and stand in solidarity with people with albinism worldwide. Everyone is encouraged to support their cause, their accomplishments and their positive practices as well as to promote and protect their human rights.

In light of this call to solidarity, the World Forgotten Children Foundation (WFCF) partnered with Under The Same Sun (UTSS) in 2017 to provide $3,301 to purchase textbooks and reading stands for 70 students with albinism in Tanzania (World Forgotten Children Foundation, 2017). Initially, without the reading stands, the students with albinism were constantly reporting that they had headaches and neck pains from straining to focus on their schoolwork. The contributions from WFCF to the UTSS Education program helped to assist the children with visual impairment issues so that they could study comfortably and finish their exams easily. Furthermore, the WFCF donations helped UTSS purchase textbooks for the students who needed them to complete their exams.

As stated before, albinism is a genetic condition where people are born without the normal pigment color in their bodies and are therefore, not able to make the normal amount of melanin in their bodies (Dowshen, 2014). The melanin is a chemical that is responsible for the eye, skin, and hair color. There are also different types of albinism that have the ability to affect people of all races.

One form of albinism is called oculocutaneous albinism. People with this type of condition have extremely pale skin and eyes, and white hair (Dowshen, 2014). People that have this same type of albinism may also have a little bit more color in their hair, eyes, or skin. Melanin is known for protecting the skin from the sun and since people with albinism have less melanin, they are more susceptible to getting sunburned quickly or can be at risk for skin cancer.

People that have ocular albinism are only affected in their eyes and usually have blue eyes. In some forms of this condition, the hearing nerves may also be affected, resulting in hearing problems and deafness over time (Dowshen, 2014). Other types of health complications could include bleeding, lung, bowel, and immune system problems.

Struggles and Misconceptions of Albinism

One important fact to note about albinism is that it is not contagious! Albinism is only inherited because people are born with the albinism gene or genes that they obtain from their parents. Although there is no cure for the genetic condition, there are some symptoms that can be treated. Even though most people with albinism do not have health problems, they do have to take certain precautions like wearing sunglasses and sunscreen when out in the sun.

In conclusion, people with albinism are just like everyone else and have the same life expectancy as anyone else. Even though the genetic condition is still misunderstood socially and medically, it is our responsibility as a human race to eradicate discrimination and the mistreatment of our fellow human race with albinism. On International Albinism Awareness Day, we are reminded to stand in solidarity with people with albinism by celebrating all of their differences that make them uniquely beautiful.