Children With Disabilities Left Behind As War In Ukraine Rages On 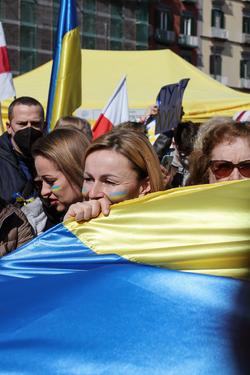 As of April 11, the United Nations Human Rights Office of the High Commissioner (OHCHR) had recorded 4,450 civilian casualties due to the invasion of Ukraine. A total of 1,892 people were killed (478 men, 308 women, 30 girls, and 52 boys, as well as 71 children and 953 adults of unknown sex). Most of the civilians deceased were due to the use of explosive weapons with a wide impact area, which includes shelling from heavy artillery, multiple launch rocket systems, missiles and air strikes that kill people indiscriminately. OHCHR believes that the actual number of casualties is much higher than the number currently recorded due to a delay of information being reported from regions with heavy fighting, such as Mariupol, where there are allegations of many civilian deaths.

The Bucha Massacre was seen by many as a turning point in the war, with the excessive violence against civilians used by Russian forces had resulted in international condemnation. In an article that appeared in the New York Times titled “Bucha’s Month of Terror,” people recalled terrifying moments as Russian forces entered the town and attacked civilians, many of whom were women and children, brutally. Bucha, a town a few miles west of Kyiv, had Russian special forces force their way into the town and start shooting at cars on the road and civilians going on with their lives, one of which was a woman in her garden who was murdered as the Russian forces drove through the suburbs. Evidence shows that the forces often used brutal, excessive force that seemed sadistic in many ways as revenge for the Ukrainian pushback. “They were not able to defeat our army,” said Nazar, a 17-year-old, “so they killed ordinary people.”

Disabled children, an often forgotten population, have lost their families and homes as people flee the war while leaving them behind. A new report published in Disability Rights International (DRI) showcase the terrifying reality for disabled children in the war-torn Ukraine. "They gave us the children no one else wanted," an anonymous director of an institution pertaining to housing children said. "They unloaded them from the train like dead bodies." When DRI sent a team to Ukraine to look into the living conditions of disabled children living in Ukraine's institutions, they found that they were overlooked by the majority of people, and they received almost no support from international relief agencies or international organizations aiding Ukraine.

In half the facilities that DRI visited, children and adults that had disabilities and desperately needed help were left behind, while other less impaired and non-disabled children were able to be evacuated from the same institutions to a number of different European countries, such as Poland, Italy and Germany. Children with disabilities often face more dangers and get left behind with little to no support. "DRI investigators observed children tied down, left in beds in near total inactivity, and held in dark, poorly ventilated rooms that are so understaffed that they are enveloped in smells of urine and feces," the report by DRI reads. Due to years of emotional neglect, children with disabilities were seen rocking back and forth and often self-abuse. Due to staffing issues and a lack of experience, staff in these institutions usually do not do much beyond restraining the children for most of the day.

Children living in these institutions are lonely and cut off from the emotional love provided by parents. Although this was true before the war, it is now worsening due to staffing issues and increasing isolation. The resources and staff in these institutions were struggling to keep up with the needs of these children even before the war, and it has gotten even worse after much of the staff has fled or become actively involved with the war. In more than a few cases, basic needs and treatments, such as hydrocephalus, were unavailable, leading to the children dying a slow, painful death.

"Children who come here stay their whole life," said the anonymous director. "This is their fate. There us no place else to go. This is a degradation of humanity."

The impacts of war on public health resources have been long-documented, which makes the Ukrainian outlook even more concerning. War causes misallocation of resources and is one of the root causes of worldwide morbidity and mortality. This means that even though people may sometimes not be directly affected by attacks, the fact that resources are being used to care for people attacked directly by the war is bound to cause people with other diseases not to have the care they need. The effects of war on mental health are also a cause of concern, especially when it comes to children in developmental years. An article published in The Lancet mentioned the extent of the physical and mental health problems for internally displaced citizens, refugees and orphans that are caused by the Russian invasion and the consequences for public health. The Ukrainian health system is also facing a lot of challenges, with a high increase in demand and an inability to keep up with the casualties of the war. Shortages of oxygen supplies, medication and other medical equipment renders the healthcare system incapable of performing basic functions. In addition, the impact of the invasion will cause the citizens of Russia and Belarus to suffer due to economic sanctions, causing their healthcare systems to suffer supply shortages and debilitating their ability to help patients. “The social, economic, and political stresses will worsen the living conditions of many and may potentially trigger substantially increased mortality similar to that seen following the collapse of the Soviet Union,” reads the article.

The effects of the war in Ukraine will be seen in the long-term, and it is paramount of international aid to continue beyond the news cycle. To help the Ukrainian cause, read this blog by World Forgotten Children Foundation listing some organizations listed in Pennsylvania and explore some ways to get involved.

Left behind in the war: Dangers facing children with disabilities in Ukraine's orphanages. Disability Rights International. (2022, May 9). Retrieved June 23, 2022, from https://www.driadvocacy.org/new-report-left-behind-in-the-war-dangers-facing-children-with-disabilities-in-ukraines-orphanages/